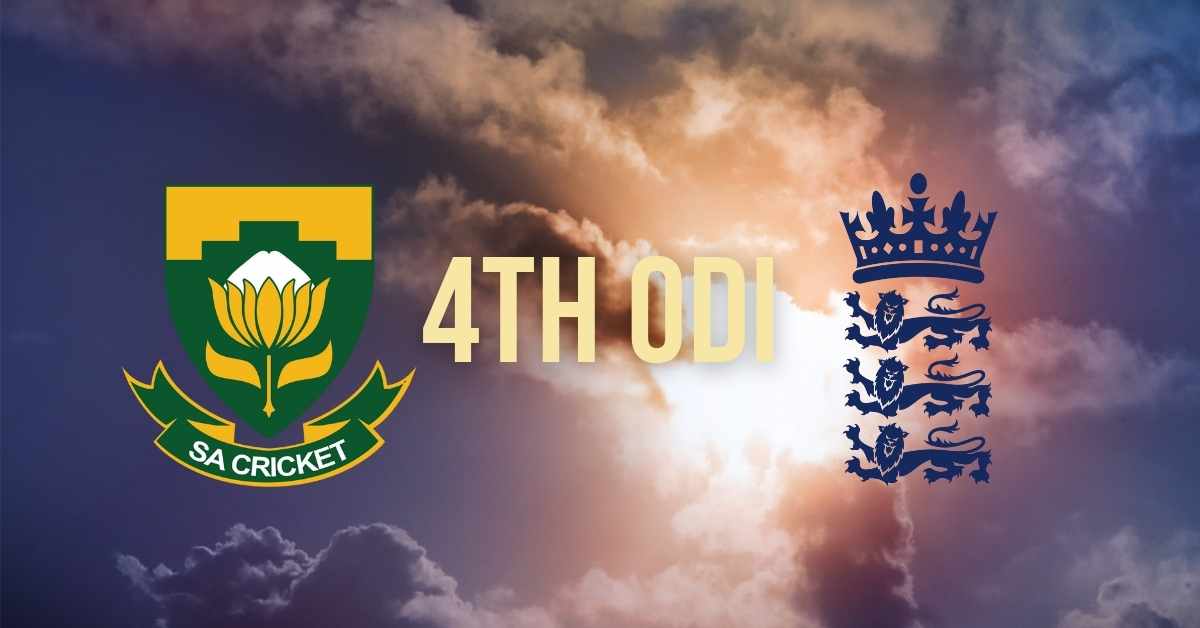 The straw that broke the back of the 4th ODI

Kagiso Rabada the hero of the fourth odi. The proverbial straw that broke our 4th odi series dream at the Wanderers Stadium in Johannesburg. Although truth be told Chris Morris didn’t help either. I am jumping the gun a little here. having spent a day recuperating from what happened during the 3rd odi at Supersport park I then settled and got ready to see England and South Africa cricket do battle in the 4th odi at the Wanderers Stadium.

The Wanderers a venerable old gentleman of the South African cricket scene. The stadium was first built in 1896 and was the scene of the first test match between the England cricket team and a South African Cricket team. Which English cricket won, but remember back then this was test match cricket. The stadium was not at its present location but closer to the ‘centre’ of Town. In 1946 it was demolished and a railway station was built on the old stadium grounds.

For 10 years the Wanderers as we know it was in limbo and cricket being relegated to being played at Ellis park a rugby stadium. In 1956 the new Wanderers stadium was built in its present location. It is a lovely stadium that is in the middle of a rather cosmopolitan area of the city. The one boundary has a row of flats running behind the stands and my exact thoughts on seeing this,” a cricket fan’s delight.” Imagine being able to sit on your balcony and watch live cricket whenever a match is happening. Enough now let’s move onto the match.

After the customary huddle on the pitch South Africa won the toss and elected to field. A rather strange descision, but in hindsight a wise one. It seems that South Africa seem to enjoy the challenge of the chase.

We got off to a rocky start with Jason Roy going for 6 off the bowling of Rabada. Little did we know at the time that this was just the tip of the iceberg. Things however seem to settle with Hales And Root steadying the ship with a respectable 50 and 109 respectively. But then the rot set in and our middle order collapsed. The pink clad South Africa cricket lads were on fire and with some good bowling were able to get Morgan(2), Stokes(2), Buttler(1) and Ali(4) the wickets being shared by Tahir and Abbott. Woakes(33) and Rashid(39) put up some resistance in the tail but Young Rabada came back to take both wickets as well as Broad(6) who had been brought back into the English cricket team to counter de Kock. So this young bowler Rabada was definitely the proverbial cat amongst the pigeons. He returned figures of 4 for 45 off 9 overs and 5 balls. I must also mention the spinner Tahir who also returned figures of 3 for 46 off 10 overs. However watch out for young Rabada who at 19 has an impressive career ahead of him. The end result we were all out for 262 after 47 overs and 5 balls. Not a very auspicious day at the office for English cricket at all. But not all is doom and gloom in this incredible game of cricket. Because if we had trouble then the South Africans would too.

Welcome back Broad lad. The idea seemed to be to bring him back to put the brakes on the South African opening bowlers and the start how brilliant taking Amla’s wicket on the fourth ball of the first innings. Here we go lads couldn’t ask for a better start. Unfortunately that was Broad’s shining moment. de Kock lost his wicket at 27 to Stokes but the middle order were restricted to low 30’s and then the other thorn in the English cricket team’s side raised his head. That was Chris Morris he proceeded to pound our bowlers a bit and scored a hard and fast 62 off 38 balls to level the score. Rashid the man to bowl him ends up. Then to add insult to injury in comes Tahir who clobbers Rashid on his next delivery for four to win the game. South Africa’s final score 266 for 9. They win by 1 wicket and Level the series 2 – 2. So all is left to play for in Cape Town.

Ford Mark Ford attention. By the left quick march left, left, left, right, left. Halt! What’s going on? I am the new official recruit in the Barmy army. Sing lad Sing you have a huge amount of learning to do. The barmy army a staunch unit of solid English cricket supporters.

It was quite fitting to join this band of brothers at the Wanderers since this is a charitable band who donate money to needy charities in the United Kingdom. So attention you new recruit and hurry up and get up to speed on the songs and chants, otherwise plenty of chores to be found for you!

Well done South Africa cricket and your dedication to the pink drive you fought back brilliantly. But Cape Town is where it all happens next. Watch out for the English Cricket machine!